LEARN TO BELIEVE IN YOURSELF

“It is not the mountain we conquer, but ourselves.” – Sir Edmund Hillary

You cannot achieve anything in life if you don’t believe in yourself. If you do not believe in yourself, no other person will. Even if your parents, teachers, friends, family, or the whole community do not believe in you, you owe yourself the obligation. The press and aviation experts did not appreciate the Wright brothers’ success initially in the United States. But they believed in themselves and went to Europe, where they gained recognition and became wealthy businessmen. Imagine if they had stopped believing in themselves because others did not!

When you become incredibly critical of yourself, downplay your positive achievements, or think you are inferior, it shows that you lack self-belief. Even before others start putting you down, you have stifled all your chances of success because you don’t believe in yourself. People who don’t believe in themselves assume that those who succeed are lucky and tend to blame others for their failures. When you don’t believe in yourself, the motivation to try is lost, and without trying, you can never succeed. The Wright brothers we talked about believed in themselves, and today we can travel faster around the world in planes.

You can increase your self-belief by talking positively to yourself. Come on; you are not as bad as you think you are even if you are at the bottom of the class now or are treated with disdain by others. Don’t be too hard on yourself if you make a mistake. All the people who succeeded made errors many times that you probably don’t know. Don’t compare yourself to others; if you have to, let other people’s success be an inspiration for you. If they can make it, you too can.

Think about the things you are scared of trying right now because you do not think you can succeed in them. I used to hate Mathematics in those days because I was afraid of failing it every time. However, when I faced my fears and decided to learn from others and study independently, I found out that Mathematics is not as complicated as it seemed to me. I want you too to be able to overcome your self-doubt by picking on one difficult thing for you immediately and facing it. Do not worry if you fail!

Remember, if you don’t believe in yourself and what you can do, no one else will. At B2SL, we challenge you to continue to work on improvement until you make it.

I will love to hear your comments or questions in the comments section below.

Henry Ibrahim is the Content Creator at B2SL. He loves working with young people to help them discover their purpose in life. You can contact him at ibrahim@b2sl.org. 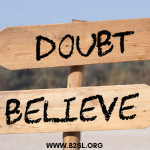 WHY YOU MUST KEEP BELIEVINGBlog 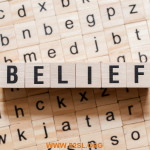